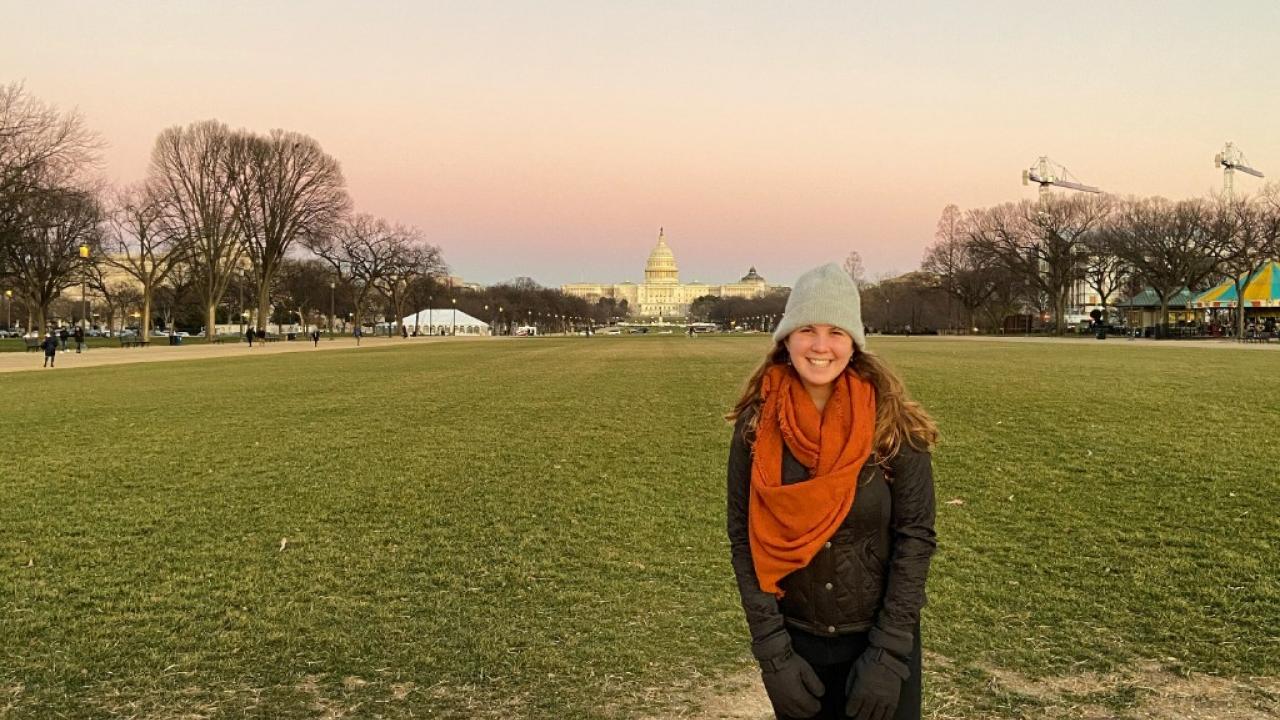 Following in her family’s footsteps, there was no doubt in her mind that Ellie wanted to go to Washington D.C. After watching her older sister go through the UCDC program at UC Berkeley, Ellie was excited to apply for the Washington Program when she came to UC Davis and knew it would be an amazing chance to get work experience and live in a new city while in college.

One of the biggest challenges students face when they study away from home is the feeling of homesickness. For Ellie, this was her first time experiencing life away from people she knew. When coming to UC Davis, Ellie had friends from high school and already knew her freshman year roommate, but going to Washington D.C. was her chance to be truly independent for the first time.

To cope with missing the familiarity of home, Ellie not only branched out to make friends within her cohort and at her office, but she also grew to appreciate her alone time and took it in her stride. She explored many of the things D.C. has to offer by herself, taking as much time as she wanted at each museum or monument she visited. She was able to fully appreciate the Lincoln Memorial—her favorite spot in the world, she told me—and carefully observe each exhibit she went to without the distraction of others. Ellie even took the brave step of traveling to new states and cities by herself, truly embracing her independence.

“The biggest trip I did—which was crazy for me—was going to New York City alone. I had some days off of work, so I decided to go.  I stayed with a friend, but spent the days touring myself around the city. It was really exciting for me; it was a big growth moment to go by myself and actually really enjoy it. Just to know that I can do something like that is really empowering.”

Through her internship with the University of California Office of Federal Governmental Regulations, Ellie got to experience Washington D.C. through a nonprofit lens as well as what life on the Hill is like. She was often assigned to attend and take notes on hearings revolving around major political issues, where she got to see key political players. At the same time Ellie got to see how her organization researched those issues and how the result of that research impacted the UC system.

For most students, the Washington Program is very directional—it has helped many alumni narrow down their career paths—but for Ellie, her experiences in the program and with her internship taught her there were many things she wanted to do and could do when she finishes her degree. Overwhelming? Maybe, but Ellie isn’t worried.

“It’s proven to me that there are lots of things I could do, that I would be very happy doing. I talked to everyone in my office and I learned about their previous careers and they had all enjoyed their experiences along the way. DC also has so many opportunities, so it showed me that there are so many ways to impact the world in a positive way and that once you have basic skills, you can apply them to lots of different things.”

As she continues on her degree path, Ellie remains excited about the possibilities that await her in Washington D.C.; she hopes to go back to the nation’s capital and start making positive impacts on the world.